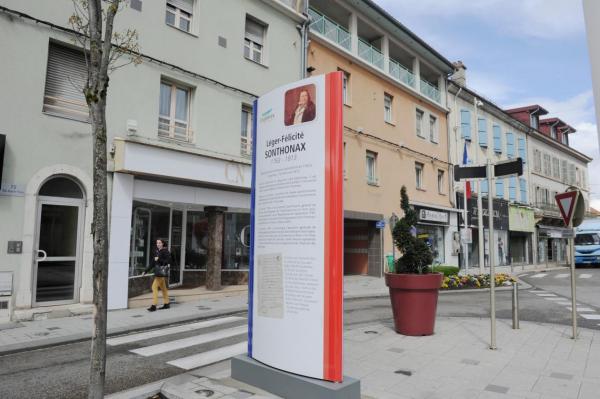 Léger-Félicité Sonthonax was born in 1763 in Oyonnax. Law student, he became a lawyer in the Parliament of Paris in 1789, when the French Revolution began.

Enthusiastic, he defended the abolitionist theses of the Society of the Friends of the Blacks. Linked to Jacques Pierre Brissot, the leader of the Girondins he met at the club of the Jacobins, he stands for the immediate abolition of slavery as of 25 September 1790 in an article of the Révolutions de Paris.

In August 1791, a revolt broke out in the northern part of Santo Domingo, at the heart of the sugar economy of the richest French colony.
After having long listened to the theses of the slave settlers, the Legislative Assembly was sensitive to the arguments of the “Brissotins”. On 4 April 1792, it granted the full citizenship to all free people of colour. It decided to send a civil commission with full powers, with the mission to enforce the law, to restore the authority of France and to encourage slaves to return to plantations. Sonthonax was designated as one of the three civil commissioners for Santo Domingo on 29 April 1792 with Etienne Polverel and Ailhaud. 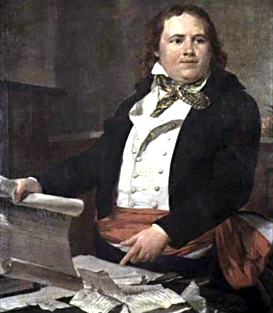 On his arrival on 18 September 1792, Sonthonax decided to ally himself with the free ones and thus imposed his authority by force. He declared the dissolution of the colonial assembly exclusively composed of whites. When he entered Port-au-Prince, the capital, in April 1793, he exiled several white settlers who did not accept the equality with the free of colour. In the same way, he succeeded in containing the insurrection of the slaves of the north, whose chiefs took refuge in the eastern part of the island, then a Spanish colony.

The war against England and Spain in February 1793, following the execution of Louis XVI, presented a new problem for the civil commissioners. In a few months, most of Santo Domingo was occupied and many settlers joined one or the other of these countries, emigrated or took up arms. In June, Galbaud, the new royalist governor, supported a riot of whites at Cap-Français.

Sonthonax and Polverel decided to rely on the blacks. On 21 June, they proclaimed freedom for all the slaves who would fight for the Republic. Bands of rebellious slaves invaded and burned Cape Town. Galbaud fled with thousands of whites.

On 29 August 1793, Sonthonax took a radical measure, which represented one of the most important events of the history of the Americas: he decreed the general abolition of slavery in the northern province (but with the obligation to return to work on the plantations for those who do not fight). In his decree, he affirmed that his mission was to “gradually prepare, without tearing and jolts, the general enfranchisement of slaves”. 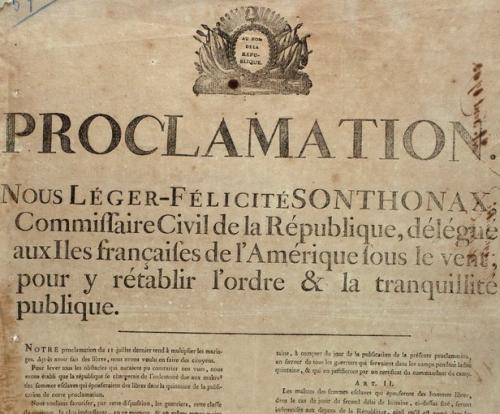 Proclamation of abolition on 29 August 1793

A little later, on 21 September, Polverel abolished slavery in the West and South. On 4 February 1794, the Convention ratified Sonthonax's decision with enthusiasm and extended it to all other French colonies.

The slaves did not immediately agree with Sonthonax, who had to persuade the leaders of the rebellious slaves of the North to join the Republican camp. It is only at the beginning of May 1794 that Toussaint Louverture and his disciplined and hardened bodies joined him.

The supporters of the settlers in Paris took the opportunity to argue against the arbitrariness of civilian commissioners at the Convention. Having lured against them some of the delegates with interests in the islands, Polverel and Sonthonax were indicted. Having received their order of appearance, they had to leave the island on 14 June 1794. 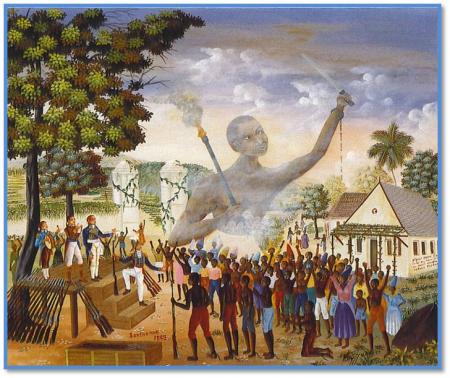 Sonthonax defended himself before a commission led by Garran Coulon. He argued that neither the colonists nor the free people of colour, whom he had been sent to defend originally, were no longer loyal to France. He claimed that the Republic placed its trust in the “citizens of August 29”: freed slaves. Having been successful on 25 October 1795, Sonthonax was appointed by the Directory at the head of the third civil commission on 23 January 1796. He returned to Santo Domingo where Toussaint Louverture worked to consolidate his own power.

Sonthonax not wanting decolonization, the black general arranged to have him elect deputy of Santo Domingo at the Council of Five Hundred in September 1796. Sonthonax, aware of the manœuvre, tried to stay. Toussaint Louverture seized an opportunity to place Sonthonax on 24 August 1797 under an armed escort aboard a ship sailing to France.

Back in Paris, Sonthonax sat as deputy of Santo Domingo. He professed his negrophile ideas there. When Bonaparte seized power, he arrested him and exiled him outside Paris.

He fled to his hometown, where he died on 23 July 1813. He had married his mistress, a mulatto named Villevaleix.