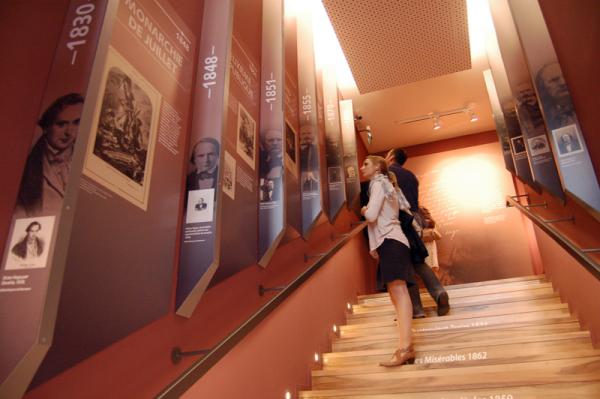 A few months after the birth of Victor Hugo in Besançon, Toussaint Louverture, deported at the Fort de Joux, passed in front of his birth house, but the Hugo family had already left for Marseille. The meeting between the “sublime child” and the “black Napoleon” was none other than topographical, just as he never knew his maternal grandfather Jean-François Trébuchet (1731-1783), a tireless navigator who died at sea after having accomplished more than twenty crossings between Nantes and the Antilles, but without ever having practiced the triangular trade. Léopold Hugo, Victor’s father, published in January 1818 a memoir on the means of compensating the slave trade by free individuals, and in a way that guarantees for the future the safety of the colonists and the dependence of the colonies. All this may perhaps explain why Victor Hugo’s first novel, Bug-Jargal, improvised before his eighteenth birthday and published for the first time during spring 1820, deals, against all odds, with the revolt of the slaves of Santo Domingo (today Haiti) in August 1791. Bug-Jargal, a fascinating leader inspired by Toussaint Louverture, took the lead of this revolt. The one who tells the story, Delmar in a first version, Léopold d'Auverney in the final version, was the French nephew of a settler, imbued with the values of 1789, admirer then friend of Bug-Jargal, slave of his uncle. The story, complex and so little Manichaean, which allows all interpretations, ended tragically. 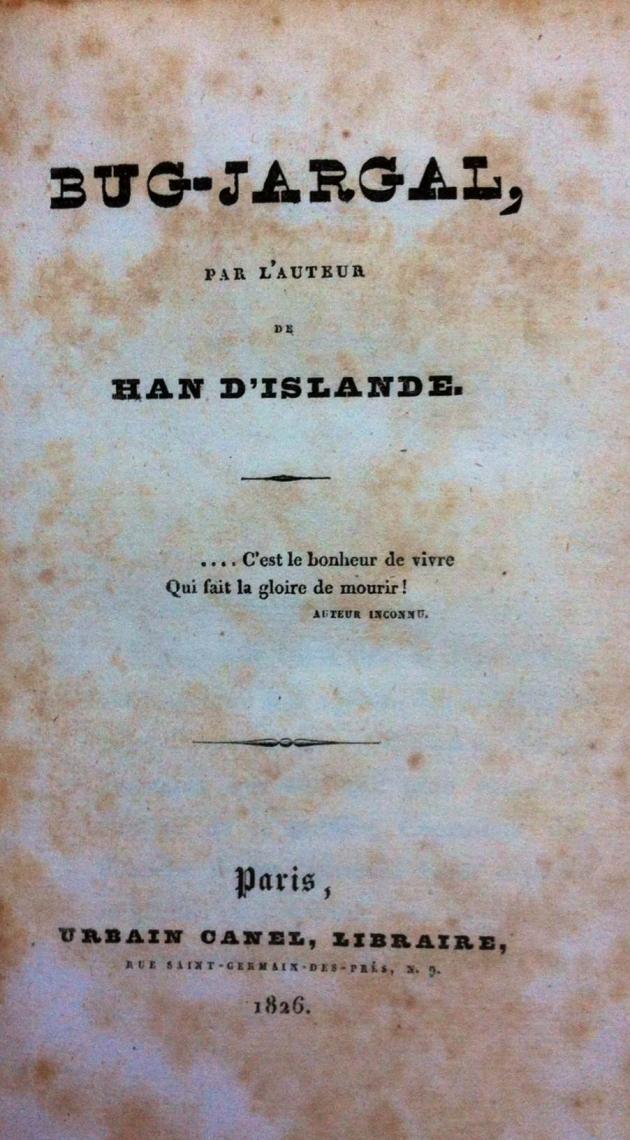 Three years after the abolition of slavery in the French colonies decreed by Victor Schœlcher, an American abolitionist of Boston, Maria Weston Chapman, implored the help of Victor Hugo. The latter replied with a letter dated 12 May 1851, which was his first direct intervention on this question: “What! Slavery has the status of law at this famous nation […]! Slavery in the United States! It is the duty of this great republic not to give this bad example any longer.”

Exiled by Louis Napoleon Bonaparte at the same time and often next to Victor Schœlcher, whom he became on this occasion one of the closest friends, Victor Hugo adopted his fight. He tried all means: letters (“Slavery and republic! What a frightful misinterpretation! ”), Poems (“Ah! Slavery with an abject face, with oblique eyes, / Mourning for royalties, shame on the republics”), and even drawings, the best known of which is “Le Pendu”, an homage to John Brown. John Brown, a white American abolitionist, had decided to use radical methods against slave owners. Arrested during a bloody act of force, he was condemned to be hanged in public on 2 December 1859. Victor Hugo, who had been campaigning against the death penalty for thirty years, intervened in his favour with a vibrant letter “To the United States of America”. He announced, no more and no less, the American Civil War, and ended with a formula intended to remain engraved in the memories: “Yes, that America knows it and thinks of it, there is something more frightening than Cain killing Abel, it is Washington killing Spartacus.” Victor Hugo moved heaven and earth to spread this call and was the only European to really participate in this debate that unleashed the passions overseas; but his letter arrived too late. He felt a great frustration, and was more determined than ever to continue the fight (“Let’s crush slavery”). For the first time in his life, he even agreed to diffuse and sell one of his most spectacular drawings, “Le Pendu”, in order to “keep alive in souls the memory of this liberator of our black brothers, of this heroic martyr John Brown, who died for Christ and like Christ” (10 January 1860). 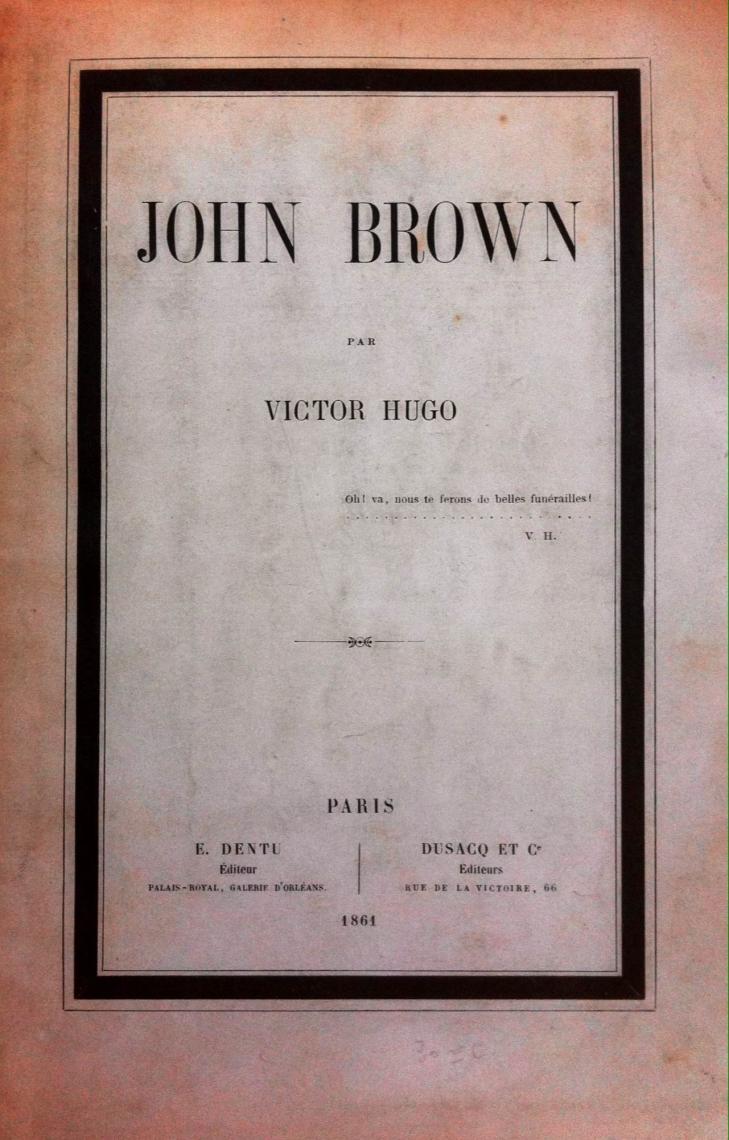 He then intervened regularly, publishing in Le Progrès of Port-au-Prince a defence of “this black humanity so long oppressed and unknown”, indicating to the Guadeloupian Creole Octave Giraud, who had asked for his advice, the plan, the subject (the slavery) and the title (L’Homme noir) of a book to write: “What a subject! So far, only the white man has spoken. The white man is the Master. The moment has come to give the floor to the slave. The white man is the executioner; the time has come to listen to the patient.” After the abolition decreed in the United States, he continued the fight with Spain, where royalty had just collapsed. He enjoined it to choose the Republic, and to draw all the consequences: “It excludes the royalty on top and slavery at the bottom. /Having slaves is deserving to be a slave.”

On 18 May 1879, Victor Hugo chaired a large banquet commemorating the abolition of slavery next to his old friend Victor Schœlcher. He began with an apology, which proved that he had kept the sense of proportions: “I chair, that is, I obey. The real chairman of a meeting like this, one day like this, would be the man who had the immense honour to speak on behalf of the white human race to tell the black human race: You are free. This man, you name him all, gentlemen, is Schœlcher. If I am in that place, it is because he wanted it. I obeyed him.” One year before his death, in March 1884, he still had time to salute the abolition of slavery in the province of Ceará (Fortaleza). He took the opportunity to move from the province to the country, then from the country to the world: “Brazil stroke a decisive blow to slavery. […] Before the end of the century, slavery will have disappeared from the earth.”

It was a little optimistic, but he worked very hard to reach this goal. His fight against slavery was certainly delayed and less systematic than his fight against the death penalty, but Victor Hugo was indeed a great abolitionist in both senses of the word.